Ramblings of a Closet Novelist

I’m in between books right now, waiting impatiently for the book I ordered from the library to arrive. That makes me cranky and more than a little obsessed with reading. Hence, my post today.

I just finished reading “In a Dark, Dark Wood,” Ruth Ware’s debut novel, and enjoyed it quite a bit. You can see my thoughts here. But overall, reviews were mixed. One of the complaints I noticed on several reviews was that the characters, including the main character, were unlikable. That’s not the first time I’ve read that complaint about a popular book.

It made me wonder. Is it necessary for characters to be likable in order to tell a good story? Of course, it’s ideal when we love the quirky and fun characters on the page. Those are the best books to read. But will readers keep plugging along if the protagonist is a jerk? For me – here’s an ambiguous answer – it depends. 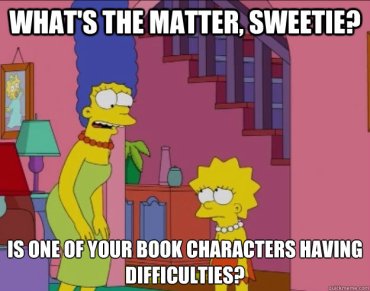 First, it depends on whether it’s a series or a standalone novel. For a series, then yes, the main character and most of the supporting characters need to have some redeeming qualities. I’m not going to keep tuning in if I don’t like hanging out with these folks. There is one series of books I’ve tried reading but I keep putting off finishing the series because the characters have become insufferable. I love the plots and the writing is perfect, but the main character is arrogant and has too many snobby quirks for my liking. Not that the protagonist has to be nice. I love Sherlock Holmes even though he’s severely lacking in the human interaction department. That’s why Watson is so important to the stories. But in this other series, all of the main characters are annoying. I’ll probably finish the series eventually but I keep finding other books to read first.

My biggest pet peeve with series characters is when they don’t evolve over the course of the series. That to me is a deal breaker because it’s just not real. People change and their experiences make them better or worse human beings. So if a formula works for Book One, I don’t want to see that formula repeated ad infinitum or I’ll quit reading. (Stephanie Plum books, I’m looking at you. But what do I know? These books are still bestsellers.)

For standalone books, however, I am much more forgiving of horrible characters as long as you give me a good plot. I’m not talking about characters that kick puppies or abuse children being the hero of the story; that’s not going to work. But deeply flawed characters, especially when the flaws are born out of suffering, can be good protagonists as long as they move the story forward. In Ware’s second novel, “The Woman in Cabin 10,” her main character is a hot mess. But that’s the only way the story would work. The plot revolves around a travel reporter who thinks she witnesses a murder on a luxury cruise ship but no one believes her. Heck, I didn’t believe her. That’s why the story works. If Lo had been a Diane Sawyer clone then, of course, everyone would believe her. And if the crew didn’t take this Diane Sawyer clone seriously, the other guests would wonder why. Instead, we see evidence that Lo tends to drink too much, is not the world’s best reporter, and could be suffering from PTSD after a burglary in her home right before she left for the cruise. Would I want to take Lo for coffee? No. But her weaknesses work well with the story.

Books like “Girl on the Train” and “Gone Girl” have also found success even though the cast of characters is largely unlikable in both books – but the plots still work to the point readers overlook the characters’ flaws. At least for most readers. If you look at the negative reviews on both books, “unlikable characters” is usually cited as a big reason why.

It’s a fine line for authors. If they create a character that is too good and always makes the right decision, then readers will call that character a Mary Sue/Gary Stu or complain the protagonist is bland. But make the character too unlikable and readers may reject the book altogether. It’s subjective, really, at what point the character becomes too unlikable. I’m normally a John Grisham fan but quit reading “The Chamber” when I realized I gave not one iota about anyone in the book. Not caring whether someone is executed or not is kind of important to the momentum of the story so bailing out made sense for me.

So what do you think? How important is it that you like a book’s characters? Any favorite characters you love to hate?

And remember, my books are still on sale this month at Smashwords. Check it out here.